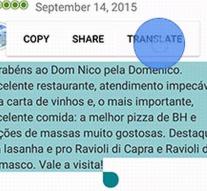 - Software giant Google has had a significant update to Android. It is now possible to translate text into other apps directly into the application .

The new translation feature works in any application where text is selectable. Once one or more words are selected, in addition to options like "copy" now appears "translate". The only drawback is that the new feature works only with phones running Android 6.0.

This has been released, but is currently only available on Nexus devices.