Home / World / Airplanes US and Russia close to each other 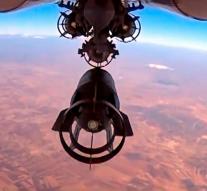 - American and Russian fighters have come on their missions over Syria within visual range of each other .

That said, a US military spokesman Tuesday . He added that the incident underlined the need of security protocols in the air , now both countries separately conduct bombardment in Syria . According to the Baghdad -based spokesman for the US-led military campaign against IS , both bombers arrived Saturday at a distance of a few miles of each other . That was the same day that US and Russian military conversations conducted on safety protocols. The flight crews from both countries have "professional" acted , the spokesman said in a briefing at the Pentagon.