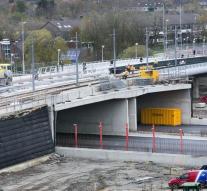 delft - The new piece of A4 between Delft and Schiedam can open. The Delfland went Tuesday to accept the revised permit for Rijkswaterstaat. Pocket daily half million gallons of water pumped under the highway is three times more than planned. If not, then the highway would be flooded to stand.

The Water Board was concerned that the water table in the sunken portion would drop to Schipluiden which homes would sag. By draining in a special way (return drainage) water is pumped back into the ground. This allows the soil dries not and it does not sound in too.On the construction of the section of highway has been discussed for decades. The road is seven kilometers long and partly sunken track. On weekdays, there will be 128 000 vehicles using them, it is expected.
NEW