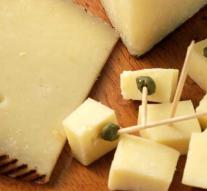 agurain - Due to a fire in a cheese factory in Agurain in the Spanish Basque country, 2 million kilos of cheese was lost on Monday. The newspaper El País reported that there were no injuries.

The fire brigade said that the fire broke out shortly after midnight and that at that time there were no employees in the cheese factory.

The fire started from an unknown cause in a room with cardboard, plastic and other combustible material. Only at the beginning of the afternoon did the fire brigade control the fire.