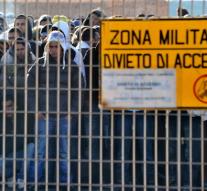 rome - A convicted terrorist who is put off Italy last year, tried to return a refugee in Europe.

Mehdi Ben Nasr (38) was sentenced in 2008 to seven years in prison in Italy and is regarded by the authorities as dangerous. After serving his sentence, he was deported last year to his native Tunisia.

Now Ben Nasr proves to be caught after he was rescued on October 4 along with 200 others by the Italian Navy, Italian media report. After arriving on the island of Lampedusa calling himself Mohamed Ben Sar and he said he wanted to travel to Northern Europe, where he had family.

Tunisia, Italy had already warned of the arrival of Ben Nasr. After taking fingerprints his identity was discovered.

Italy sees Ben Nasr as a dangerous terrorist. He would have people recruited to jihadist groups in Syria, Iraq and Afghanistan. At his home in Novellara, in northern Italy, were found in 2007 by Al Qaeda manuals for the production of explosives.

The police would have halted the incident to cause unrest. Have long feared that among refugees crossing the Mediterranean IS terrorists or Al Qaeda are. The Italian authorities have always denied.