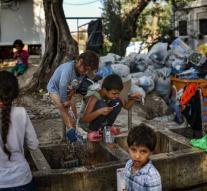 geneva - The United Nations refugee organization is alarming the situation in the overcrowded refugee camp Moria on Lesvos. The situation reaches a 'boiling point' there, says a UNHCR spokesperson.

Moria is intended for the reception of 2000 people, but according to the UNHCR about 7000 migrants and asylum seekers are accommodated. About a quarter of them are underage. The organization wants asylum seekers who are eligible for relief on the mainland to be transferred more quickly.