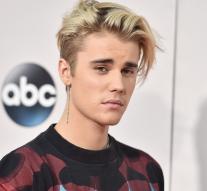 - The team that takes care of the promotion for the album Purpose of singer Justin Bieber has some explaining to do. San Francisco is blazing over the graffiti on sidewalks in the city which are used to for the board of the Canadian pop idol.

At the city council is already weeks bitterly complained about the Purpose graffiti, which appears quite persistent. It already has several times been raining in San Francisco, but the advertising is almost impossible to get away. Prosecutor Dennis Herrera of San Francisco requires the full cooperation of the record label and distributor of Bieber to find out who exactly is behind the 'vandalism' is.

In a letter to board members of Def Jam Records and Universal Music Group Herrera writes that he wishes to recover the damage on the people responsible for these 'illegal marketing tactics. The Streets of San Francisco are not meant for advertisement , according to the prosecutor. This guerilla marketers know that, but they think they are above the law. We will deal with them very hard.