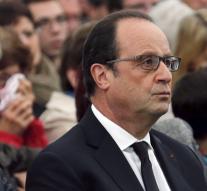 bordeaux - Four days after the bus crash with 43 ​​deaths, French President François Hollande commemorated the victims. The commemoration began Tuesday morning with a minute of silence in Petit-Palais northeast of Bordeaux.

Hollande had previously met with family members and investigators of the accident. The bus with a group of seniors on a day trip, crashed Friday into a turn on a truck that had landed on the wrong lane.

After the collision flew the bus on fire, so most passengers were trapped. It was the worst bus accident in France in the past 33 years.