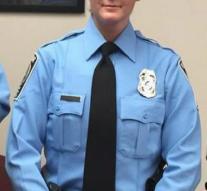 - A 26-year-old American policewoman was shot on her first day. The woman, Ashley Guindon had Friday the oath as officer and went to work Saturday, according to ABC News.

She went on Saturday at the end of the afternoon with colleagues to a house where a violent quarrel would be according to someone called the police. Arriving at the house in Woodbridge, more than 30 kilometers south of the capital Washington, the fire at the policemen opened. Guindon died quickly from her injuries. Two other policemen were not life-threatening injuries. There is a suspect arrested according to the police station where Guindon worked.