Home / World / Offensive against IS 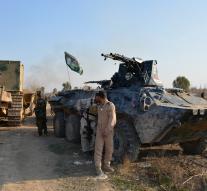 - Rebels of the Syrian Democratic Forces have launched an offensive in the area of the eastern Syrian city of al- Hasakah. In the area around the place, the terrorist organization Islamic State (IS) is active. Syrian rebels say tune the attack with the international coalition led by the United States, which carries out air strikes in Syria.

The offensive is " the first step in the plan to rid Syria of terrorist gangs ", said the rebels, according to the Syrian Observatory for Human Rights. The motion calls on the armed opposition in Syria to co-operate in the fight against IS. " A national military force should come with them Kurds, Arabs, Assyrians, and all the other people who live in Syria. "