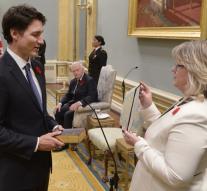 ottawa - Canada has since Wednesday a new prime minister, the 43-year-old Justin Trudeau. The election victory last month of his Liberal Party seems to be a shift to the left in Canada, where Stephen Harper since 2006 and leader of a right-wing Conservative government.

Trudeau is the son of Pierre Trudeau (1919-2000) in the sixties, seventies and eighties in fifteen years Prime Minister of the country and historic reforms has to his name. Trudeau explained in the capital Ottawa is sworn in at the residence of the Governor-General and presented his government team made ​​up almost half of women.

On Finance is a political newcomer, businessman William Francis (Bill) Morneau, and appointed the Minister of Foreign Affairs Stéphane Dion. The Ministry of Defence is since Wednesday under a Sikh born in India, the army officer Harjit Sajjan.