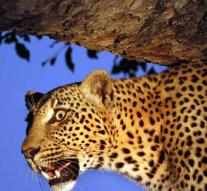 uganda - A toddler of three years old is devoured by a leopard in a national park in Uganda.

The three-year-old boy was the son of a female ranger who worked in the Queen Elizabeth National Park. According to Daily Monitor, the mother had temporarily transferred the care of the child to a nanny. The nanny and the child were on a piece of unclear territory at the Mweya Safari Lodge, an inn in the park.

Spokesman Bashir Hangi says in conversation with the news site that the leopard was hidden until he could grab the child. The tragic event took place on Friday evening around 21:00.

According to Hangi, several rangers went looking for the toddler. On Saturday morning they only found a skull under a tree.

We are now looking for the leopard that the toddler has devoured. According to the spokesperson, there is a chance that there will be more casualties now that the predator has tasted human blood.

The Queen Elizabeth National Park in the southwest of Uganda is a park with one of the highest populations of predators in the country.