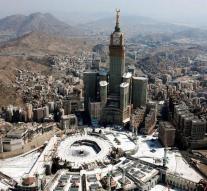 - Saudi Arabia's security forces disputed a major attack on the Great Mosque in Mecca on Friday. That reported Arab television stations. Three groups of terrorists would have been arrested.

According to Al-Arabiya, the Saudi security service in Mecca has rolled up two groups of terrorists and a third group in Jeddah was arrested. The terrorists were planning to attack mosque drivers.

The Great Mosque in the holy city of Mecca is one of the most important Islamic places in the world and is visited annually by millions of believers.