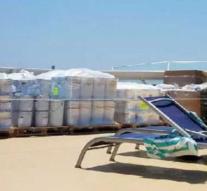 miami - An expensive 16-day cruise with the United States has become a nightmare for the 2,000 passengers. The ship was rebuilt during the trip.

The 'journey of their life' became 'sixteen days of hell' on the Norwegian Sun, so passengers complain en masse on social media.

The company from Norwegian Cruise Line sailed between Miami and Los Angeles last month, via the Panama Canal. All travelers had paid thousands of euros for their dream cruise.

Immediately after departure, the passengers were shocked to learn that 'work' would take place during the journey.

According to passenger Mae-Claire Locke, there was no time for vacation. 'The cruise ship was just one big construction site,' she says in Newsweek.

A lot of restaurants and other facilities on board remained closed. Deafening noise was constantly being made and passengers began to complain about a chemical odor. Some even got dust and pieces of metal in the eyes. Passenger Charles P. O'Dale made his complaint on the Facebook page after the trip. And added a picture