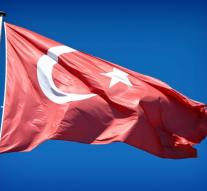 ankara - An explosion in the center of the Turkish capital Ankara Saturday deaths and injuries . According to local media , the explosion occurred near the main railway station of the city . There was a demonstration of , among other supporters of the Kurdish Party for Peace and Democracy about to begin .

According to initial reports, a person with a bomb belt itself in the public detonated. Possibly there was a second explosion. Emergency services are on site. BREAKING: Powerful blast rocks #Ankara road junction, many casualties Reported http://t.co/fUkVYBcQPE pic.twitter.com/8qhPHAAZ20- RT October 10, 2015