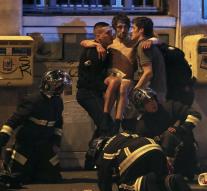 - A German arms dealer may have something to do with the attacks in Paris. He was arrested because he had sold four Kalashnikovs, reports the German newspaper Bild. The newspaper relies on documents from the authorities in Germany. Out e- mails on his cell phone shows that the weapons have been sold to someone in Paris.

There think the authorities, according to Bild that weapons are used in the attacks of two weeks. The order would be made ​​in early November via the internet. The arms dealer is in a prison in Stuttgart.