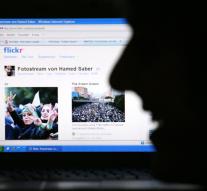 - Censorship of the Internet is greatest in China, followed by those in Syria and Iran. That Freedom House reported Wednesday in an investigation into Internet freedom that the American organization performs every year in 65 countries.

Internet freedom around the world on the back foot. Governments fit more and more censorship, more and more online users keep an eye on and act more forcefully against piracy, it says in the report.

A notable example of a country where internet freedom has declined, is France. There are censorship-type measures into effect against "terrorist web content " after the attack on Charlie Hebdo, in January this year. Opponents believe that the measures affect user privacy.

Topics that are most often censored, his criticism of the government, news about corruption in high government or business circles and satirical remarks. In 40 of the 65 countries people were put in prison because of statements on the Internet about politics or religion.

In Sri Lanka and Zambia became the Internet freedom after a change of government. In Cuba, the Internet was accessible to more people after the restoration of diplomatic ties with the US

The Netherlands is not included in the study, all pay our Foreign Ministry to do with it.