Home / World / EU is working on a secret plan for expansion 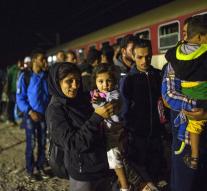 brussels - Hundreds of thousands of refugees who do not receive asylum in Europe can be deported within weeks. The European Union is working on a secret plan to that effect . This was reported by the British newspaper The Times on Wednesday.

Countries such as Niger and Eritrea must take back their economic migrants. If stick shields Brussels by dropping aid, trade agreements and arrangements for visas. It involves more than 400,000 people who entered the first half of this year, the European Union and which have no chance of asylum, those that have occurred as a refugee.

Member States should secure the possibility of thousands of migrants who threatened that they would go into hiding to avoid deportation.

A draft of the measure, which should be discussed by EU ministers involved, urges the Member States to send more migrants.