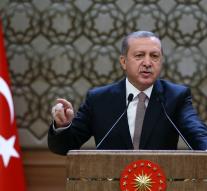 ankara - Turkish President Recep Tayyip Erdogan says the downing of Russian fighter has affected him much. " I wish it had not happened, but it has now happened once. I do hope it will not happen again," said Erdogan.

He said he hoped that Turkey and Russia can restore their relationship at the climate summit in France, which begins Monday. Erdogan made ​​his comments Saturday during a speech to his supporters.