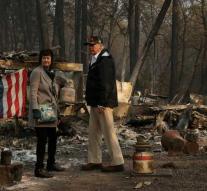 paradise - The number of deaths from the forest fires in northern California has increased again. After the discovery of five charred bodies, 76 remains have been recovered, according to local authorities.

The number of missing people also grew. There are now 1276 names and there are 265 more than the last announcement. Whether these people are actually missing is unclear. Some people are registered twice while others are now on trial.

The fire caused a gigantic damage and now spreads over almost 60,000 hectares. Especially the place Paradise is affected.