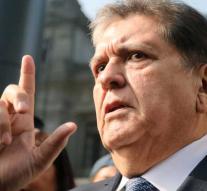 lima - Former Peruvian head of state Alan García has applied for asylum in Uruguay. García visited the Uruguayan embassy in Lima and requested asylum there, reported the Peruvian Ministry of Foreign Affairs.

García, who was President of Peru from 1985 to 1990 and from 2006 to 2011, had been denied entry due to an ongoing investigation into money laundering. He is suspected of having accepted an illegal payment of 100,000 dollars (88,000 euros) by a construction company.