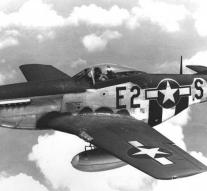 fredericksburg - In Fredericksburg, in the US state of Texas, two war veterans were killed on Saturday when the historic fighter plane in which they flew crashed in the parking lot of an apartment complex. The plane, a P-51D Mustang from the Second World War, participated in a commemoration of the battle in the Pacific that was organized by the local war museum.

The cause of the accident is unknown. Local residents told local media that they heard the engine of the device falter and then heard an explosion. No one was injured on the ground.