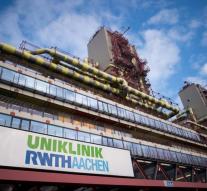 aachen - Three former nurses of a hospital in Aachen have been sentenced to suspended prison terms because they are humiliating photos, videos and selfies made of and defenseless patients. Two others were fined. The five were working on the recording of the emergency clinic, German media said Thursday.

The five were among other pictures of demented elderly. Among them were naked patients. A heavy heart demented patient was daubed with a slogan before the picture was taken.

The five caused by their actions a scandal in Cologne. Two photos and a video were distributed via Whatsapp messaging. The nurses have been laid off. The prison sentences range from six to eight months probation.