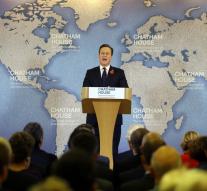 london - Britain will respect the outcome of the referendum on membership of the European Union. Choosing the British choose to leave the union, then this happens. That said British Prime Minister David Cameron in a speech Tuesday. The referendum in any case take place before the end of 2017.

There will be no second consultation. The other EU Member States must understand that it is about this one, all-important referendum. The prime minister explained once again the EU's British demands for reforms on the table. So London will include that Brussels no further prescribes that the 28 individual states have done in many areas. A little less Europe can not hurt.

Cameron writes a letter on Tuesday to the British positions to Donald Tusk, the President of the European Council.