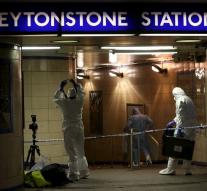 london - British Prime Minister David Cameron called the stabbing with a knife in the subway in London a " horrific attack." A 29-year-old man fell Saturday several people. His action is considered an act of terrorism. He shouted, according to witnesses, "This is for Syria."

There were three people injured. One of them, a 56-year-old man suffered serious injuries, according to police. The offender is charged with attempted murder.