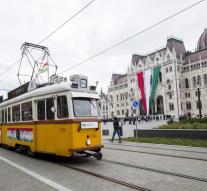 budapest - Hungary wants to build a new museum quarter in Budapest, the capital, which can compete with tourist destinations like Barcelona and Prague. The project will cost 200 billion Florint (642 million euros) and should be completed in 2019.

The city park Városliget that all the zoo, the Szechenyi thermal baths, four museums and a large green area, get a thorough renovation, the project leader said Monday during a hearing in parliament. There are also a new National Gallery and the House of Hungarian music. Elsewhere in the city still photography and a museum of architecture built.

The area is partly in place of a wide concrete promenade which was built in the communist era and today is mainly used as a parking lot.