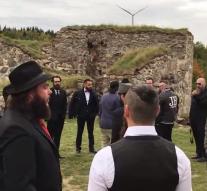 - A photoshoot of a club for men with beards made ​​Saturday in Sweden just before panic. A passerby thought he was dealing with IS- terrorists.

Not only the beards put the man on the wrong foot, also the flag of the club is a bit like that of the terrorist organization.

The rushed terror police could quickly determine happy that it was not Muslim terrorists, though only a couple of friendly hipsters.

"It was surreal," says one of the members from the Swedish Metro. "We work with the police to laugh". Nevertheless, the reaction of passers-by, according to him also worrisome because it shows which make prejudices men with beards have. "That is one of the fundamental rules of our society. That you should not judge someone before you know the facts".