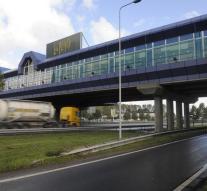 amsterdam - As from yesterday, more than sixty percent of the highways 130 km / h can be driven to watch out remains. The number of speed checks also increases.

Since this week, the foot should back off the accelerator on the A4 between Hoofddorp and Nieuw Vennep, where speeding is irrevocably fined. This brings the total number of speed checks which now stand at eight units, while there are three locations where speeding drivers approaching inexorably will run into trouble.

,, We're talking about the A20 near Rotterdam and the A12 near Utrecht, where the old equipment will be replaced by advanced technologies, 'said Ernst Koelman Service Processing Prosecution.,, Also on the A2 will be expanded control in the south of the country. As soon the brand new tunnel is completed in Maastricht, will there be a camera drooped 'says Koelman, who says that the total of eleven process controls than to attend the end has been reached.

,, We decide together with Rijkswaterstaat where safety can be increased by applying rate-limiting measures. That could set including through process controls. But not every road is there to accommodate, 'says Koelman,,, so we leave it at that. 'That process checks for motorists are difficult hurdles to take, it is clear from the number of fines that will be distributed. This past year, the total number of vouchers 1 799 216 in 2014 to 1 903 109 prints. A2 (Amsterdam-Utrecht) scored with 938. 058 fines by far the highest, followed by the A4 (Leidsechendam) with 471. 266 and A10 (ring Amsterdam West) with 200. 907 penalties.

It is notable that the total number of traffic offenses, where a coupon was issued in 2015, it decreased from 8.3 million to 7.9 million tickets. It also had to do with the collective actions by the police, who for months (light) offenders not asserted.