Home / World / Assad is the problem, not the solution 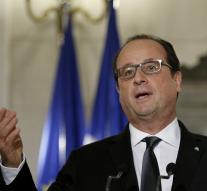 athens - Syrian President Bashar al-Assad is the problem and not the solution of the crisis in Syria. That French President Francois Hollande said Friday during a visit to Athens.

" We need a political solution to be found ", Hollande stressed. The French president spoke at a press conference with Greek Prime Minister Alexis Tsipras.

Heads of state of the European Union have criticized the military intervention of Russia in the civil war that already 250 000 people in Syria has killed. But they have failed to mutually agree on whether Assad should have a role in ending the crisis. France has repeatedly said that Assad should not be involved in discussions on the topic.