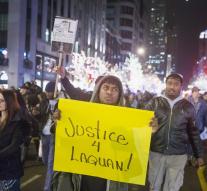 - For the second day in a row in the American city of Chicago Wednesday protested in response to the images that were released Tuesday by a white cop who shoots a black teenager. The march passes off peacefully, reports CNN.

Tuesday also went for hundreds of people to the streets. Shortly before the video was put on a police website. This happened after the shooting agent, Jason Van Dyke, had been accused of murder. A judge ruled that he should not be provisionally released on bail.

The images were taken from a police car. The plaintiffs argue that the 17-year-old Laquan McDonald sixteen times has been hit by a bullet from the weapon of Van Dyke. Who states that he shot because he felt threatened. The boy would have had a knife with him and having used drugs. The incident was in October last year.