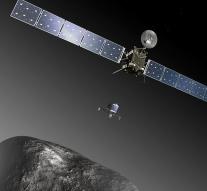 - Europe wrote history last year with a landing on a comet. Next year may follow the new step. Then Europe is the mother, Rosetta, possibly crash into the rock. " Mission Planners look at the possibilities, early December is the final decision," ESA indicated Friday the ANP.

Rosetta was launched in 2004. After a flight of billions of kilometers the probe came last year with the 67P / Churyumov-Gerasimenko. In November 2014, the Philae lander was released. That came after a few bouncing up and down on the comet.

The comet orbits around the sun. With the lander on its back and the mother at his side, he always flew closer to the sun. Meanwhile, they fly away again, the deep space. There is less and less sunlight, so the probe and lander are getting less power. Therefore measurements will become difficult. It is intended that the Rosetta latest research conducted during the fall and makes the latest photos.

The landing system and the solar panels of the comet scouts are made in the Netherlands. The probe has been tested in space laboratory ESTEC in Noordwijk.