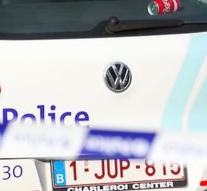 gent - A man was rushed to the popular market in the Ghent district of Wondelgem on Sunday morning. The ravage was huge, but by miracle there was only one wounded. Last News reported on his site that, according to witnesses, the Audi cabrio came off at the 100km per hour.

A drama was prevented because the driver, according to HLN, had to dodge a truck. He missed a candy cane on a hair, hit a large plate with the map of Ghent and stopped his car just before a butcher's shop stopped at a concrete pole.

The driver drove away leaving a injured passenger. The perpetrator could be detained by a watchman when he later returned to a friend to the place of evil to take up the damage he had inflicted.