Home / World / Wounded attacks Spain out of danger of life 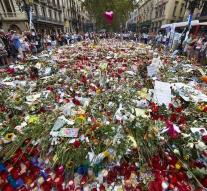 barcelona - Fourteen victims of the attacks last month in Barcelona and Cambrils are still in the hospital.

Three patients are still ill, but no one is at risk of life. There are twelve victims of the attack on the Ramblas and two of the attacks in Cambrils, according to El Periódico under the authority of the Catalan government.

At the attacks, sixteen people were killed. Over a hundred people were so injured that they had to be hospitalized. The fourteen injured are spread across several hospitals.