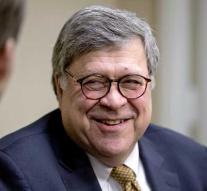 washington - The Republican William Barr will be the US Minister of Justice for the second time. The Senate agreed on Thursday with his appointment.

The 68-year-old Barr from New York also receives the role of minister in supervising the work of the special researcher Robert Mueller. He said that Mueller's research continues. Mueller examines any links between Trumps' close associates and Russians prior to the 2016 elections.

Barr was in the years 1991- 1993 Minister of Justice in the government of President George Bush senior.