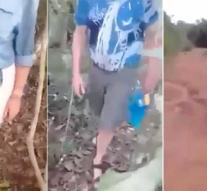 paramaribo - Two white tourists were brutally deprived in Suriname 'because they are descendants of slave-rowers'.

The racist attack took place on the road between Moengo and Langatabiki. The deprived tourists drove in and van, driven by a local driver. One of the victims tells his story in De Ware Tijd newspaper.

Chaufeur John Tojo: 'It was a terrible experience. I suddenly saw someone running on the car with a rifle in his hand. He released a shot in the air and then I understood that it was serious. We also had to lie on the ground and especially the white tourists I transported were mistreated. '

He also testified that the four armed robbers ran over the victims.