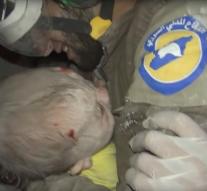 oslo - After a week in which were granted included the Nobel prizes for chemistry, physics and biology, is Friday the turn of the most famous: the Peace. As many as 376 people, groups and organizations have been nominated for the prize. The big favorite is the White Helmets: the volunteers in Syria who do not run to the shelters at each bombardment, but try to get people from the rubble.

At the Nobel Peace Prize, however, it is always guessing until the last moment. The committee that awards the prize, is to make a habit of surprising choices. As German Chancellor Angela Merkel was tipped last year because of its arrangement in the refugee crisis. Ultimately, however, the prize went to the Quartet for National Dialogue in Tunisia, which was instrumental after the Arab Spring in forging a new democratic system in Tunisia.

The White Helmets, the official Syria Defense Force, has about 3,000 volunteers and is actively involved in the besieged Aleppo. About the group recently published a short documentary on Netflix. 'Whoever saves one life, saves the whole of humanity,' is the motto of the film, a quote from the Koran.