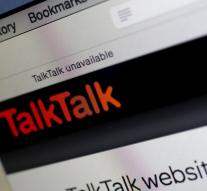 london - Police have made ​​a second arrest in connection with the cyber attack on the British provider TalkTalk. It is a sixteen year old boy from London, reports the BBC.

During the attack on Talk Talk, on October 21, possible bank details and personal information of four million customers stolen. After the computer hacking is by e- mail money demanded by the company. It is not clear whether the mail sent by the hackers is derived.

TalkTalk itself says that the intrusion of the size has not yet precisely identified. The hacked provider assumes that the hackers can not steal money from customers.