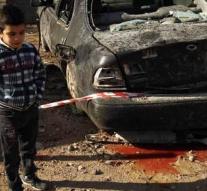 tunis - The UN mission in Libya alarmed after reports of summary executions Wednesday in the city of Benghazi shortly after a double bomb attack at a mosque that caused at least 35 deaths. The UN reacts to images that show how at least nine people are executed who were captured after the attacks.

According to the UN, the executioner of the statues looks like Mahmoud al-Werfalli, a bearded commander of special units wanted by the International Criminal Court (ICC) in The Hague for similar murders. The UN demands extradition from him.

The executions seem to have been carried out in front of the Bayaat al-Radwan mosque that was hit by the attacks.