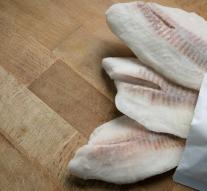 brussels - Restaurants in Brussels serve in many cases fish other than they promise on the map. This appears according to the environmental group Oceana out DNA testing of the Katholieke Universiteit Leuven.

Thus, species such as bluefin tuna, cod and sole be replaced with species that up to 40 percent cheaper. The customer who thinks they have a cod consumed may have just eaten a farmed pangasius, as shown by the investigation.

According to the researchers, it is on average 30 percent of the fish served in restaurants in the Belgian capital. In the canteens of EU institutions had even 38 percent wrong 'label', says Oceana.

" Consumers are deceived and the door to fraud with illegal fish products is wide open ", said Lasse Gustavsson, Director of Oceana Europe Tuesday. He suggests that the phenomenon is rampant throughout Europe and wants the EU to take action.

The European Commission takes the issue very seriously, a spokesman said in a reaction. " It is after all the food we eat. "

The control is a task of the Belgian government. The commissiezegsman said to assume that Federal Agency monitors for the Safety of the Food and served food matches the flag under which it is sold. If necessary, take steps the commission, he said.

The researchers studied more than 280 dishes from more than 150 restaurants, sushi bars and canteens.