Home / Tech / Virtual reality : as if you're there 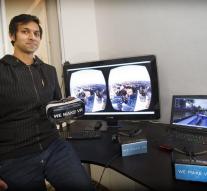 - Avinash Changa (39) single-handedly builds a 360 degree camera that shows depth. A scoop which gave recognition from the industry. Yet he finds the camera itself not important. "It 's about how you apply it, how virtual reality is relevant. "

In the early 90s was the founder of the Amsterdam WeMakeVR knowledge with Virtual Reality. Stable image supplied the Victor Maxx glasses, but the fascination was piqued. If game fanatic yet he tested various systems, but nothing did. Appeared to the Oculus Rift. "I was immediately convinced of its potential. "

The movies that make Changa went for the device does not yield what he envisioned. " All cameras yielded 360 degree video in flat image, such as Google Street View. I wanted to bring some depth, so you can not just look around you, but the feeling to be there. A camera was not there and many said it was not possible. At one point I got a hunch and I at home at the kitchen put together a working copy. "

Changa meanwhile no longer speaks about VR movies, but VR experiences. "We, people for whom it is physically too heavy to see a piece in the concert hall, still give the feeling of being there. Surgery can we capture that surgeons in training can virtually watching. They can focus at one time on the surgeon and the other time on the anesthetist. "

Changa also develops interactive VR experiences. By including multiple scenarios, for example, police officers through virtual role-playing to learn how to deal with confused people.

The app weshare VER can meet people with VR. All content is now free, but this is about to change. Changa expects people especially will be willing to pay for live VR experiences. For live sports on TV connect people often take out a subscription. VR is possible to enjoy a first class experience, where you have the people in the stadium to sit you see around you, while you are sitting in your living room. Live streaming of VR is technically possible, but a lot more expensive and inferior. "But that's a matter of time," said Changa.