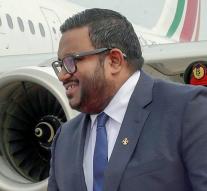 male - Vice President Ahmed Adeeb of the Maldives held Saturday. He is believed to have been suspected of involvement in an attack on President Abdulla Yameen. On board his speedboat occurred in late September an explosion. The president came with a fright, but his wife and two other passengers were injured.

The boat neared the port of capital Malé when the explosion occurred. The president enter the final stretch from the airport after a visit to the Hajj in Saudi Arabia. The 56-year-old Yameen is at home and abroad a controversial leader, who is now two years in power in the archipelago.

The tourist paradise of the Maldives in the Indian Ocean has to deal increasingly with radical youths who fight for Islamic State.