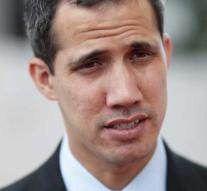 caracas - Venezuelan General Francisco Yánez has recognized Juan Guaidó as the country's interim president. He is thus the first high military to support the opposition to incumbent president...

On Twitter, a video is circulating on which the Air Force General expresses its support for Guaidó, who earlier declared himself the interim president of the South American country. Yánez calls in the message to support other soldiers on Guaidó.

The Maduro government seems to be in serious trouble if it can no longer count on the full support of the Venezuelan army.