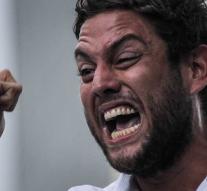 caracas - The Venezuelan secret service has arrested a politician of the opposition after the alleged attack on President Maduro. This is reported by the opposition party Primero Justicia (Justice First), who states that parliamentarian Juan Requesens and his sister Rafaela were 'kidnapped' by a group of agents at night.

Maduro had previously connected the politician with the alleged attack. He spoke about a 'psychopath, whose last name is Requesens. 'According to the president, the well-known opposition leader Julio Borges was probably involved in the incident.

The government states that attackers have tried to kill Maduro with drones equipped with explosives. According to chairman Diosdado Cabello, the powerful Constituent Assembly, which is based on the government, talks about abolishing the legal immunity of parliamentarians who were involved in the incident.

On social media a video is circulating that seems to show the arrest of Requesens and his sister. Agents strike when the duo leaves a lift. Rafaela Requesens has now announced through social media to be free again.