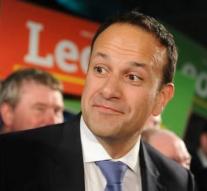 dublin - The Irish government party Fine Gael has chosen Leo Varadkar as her new political leader. The 38-year-old son of an Indian immigrant and openly homosexual follows Enda Kenny (66) as prime minister. That is a remarkable change of generation and social change among Irish Christian Democrats.

Varadkar received preference over colleague minister Simon Coveney, as expected. He won by a large majority. The new foreman of Fine Gael will probably be installed as minister president, the youngest in the history of the Catholic country on June 13, when the parliament meets again.