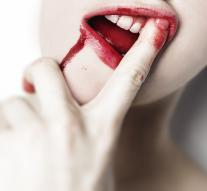 venice - Archaeologists found a feminine 'vampire' in a medieval mass grave near Venice. The woman was buried on the island of Lazzaretto Nuovo, a former quarantine area for plague victims, with a stone in her mouth. According to the archaeologists, the stone was intended to prevent them from doing good to other bodies.

At least that was the prevailing idea between 1300 and 1700 when the plague was home throughout Europe. At that time there was little knowledge of the way in which bodies dissolve.

Sometimes a mass grave was opened and the tombs saw that blood came out of the mouth of the dead and that the hair had grown. In addition, the bodies were often inflated by the gas. And the dead mask was often taken away by bacteria. That led to the idea that these 'undead' seemed to be different and then came to life again. These 'vampires' were seen as the spreaders of the plague.

Scientists have guessed for years that the plague played a role in the origin of the vampire myth, but this is the first time archaeological evidence has been found.