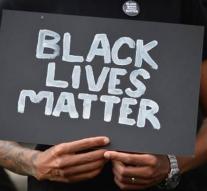 saint louis - A white ex-police officer from the United States of Saint Louis, Jason Stockley, was released on Friday by the judge for assassination of an African-American suspect. Stockley was then agent in the Ferguson district, claiming self-defense in December 2011, the 24-year-old black Anthony Lamar Smith died after a chase.

Stockley was arrested last year and charged with murder because the suspicion was that he had tampered with evidence and did not open fire to self-defense on the unarmed Smith.

About five hundred people went up the street in protest against the sentence on Friday: 'No justice no peace'. A number of protesters carried signs with the motto 'Black Lives Matter'. The same-name movement has arisen in the US in response to police violence against black Americans.