Home / World / US and Turkey will seal off Syria 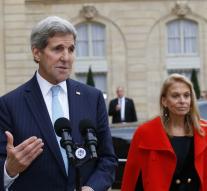 - Turkey and the United States will work together to ensure that the border between Turkey and Syria is under strict control. The US Secretary of State, John Kerry, said Tuesday on CNN.

Kerry said that three-quarters of the border has been completed and the rest are covers almost a hundred kilometers. Ankara and Washington will also close in a joint operation, said Kerry.

Northern Syria is an important base of the Sunni extremists of Islamic State (IS). The capital of what they call their caliphate is Raqqa, which lies 80 kilometers from the Turkish border. The supply of the caliphate runs largely through Turkey. Kurdish fighters already have much of the border region in northern Syria in the hands, but there are still strips of land where IS has access to Turkey.