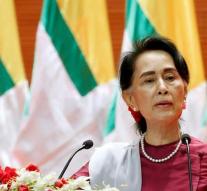 leuven - The Catholic University of Leuven has removed the name of Myanmar government leader Aung San Suu Kyi from a chair. According to the Belgian newspaper Le Soir, the founders of the chair find that the Nobel laureate winner is no longer a positive example because she does not express enough views on the Rohingya crisis. In the meantime, more than half a million people from the Islamic minority group have been killed for the violence of the government army.

For her peaceful struggle for democratization in Myanmar, Aung San Suu Kyi received the Nobel Peace Prize and several other international awards, including the Four Freedoms Award, alternately awarded in the United States and the Netherlands. However, since she's headed by the government, she gets international criticism because she would do too little for the Rohingya's. Earlier this month, the city of Oxford took her an honorary title.