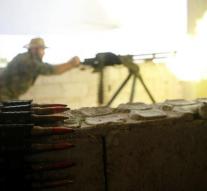 raqqa - In the offensive to conquer the official capital of Islamic state, this month, 173 people have been killed. That said the United Nations Human Rights Chief, who warned that the actual death toll in Raqqa is likely to be higher.

UN Human Rights Commissioner Zeid Ra'ad al-Hussein stated in a statement that another hundred thousand citizens were stuck in the Syrian city of Raqqa. He called the parties involved in the fight against IS in all possible ways to take measures to protect the population.

'Citizens should not be sacrificed to quickly get military victories,' said the top secretary. He said that in June at least 173 civilians were killed in the 'air and ground operations' of the city.

IS-bol Raqqa is being conquered by warriors of the Syrian Democratic Armed Forces (SDF), supported by the United States.