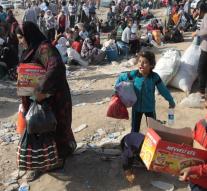 - The United Nations next year at least 7 billion euros for humanitarian aid to Syria. That is the assessment of the UN Emergency Relief Coordinator, Stephen O'Brien. According to him, the amount for emergency aid to Syria this year to 7 billion and will require the same amount in 2016. O'Brien said during a visit to Berlin.

In early February organize Germany and Britain in London a donors conference for assistance to Syria.